The harsh February Michigan winter was getting into my bones when I first met him: skinny, shy and a spark in his eyes. I wasn’t planning on finding love, not even thinking about dating as I was still healing from a broken heart. However, I felt immediately attracted to him and I could feel his eyes burning my back with my every move. The story started right after my move to Grand Rapids, even before I turned 27, and while we said our ‘I do’ in September 2005, what led there is worth remembering. 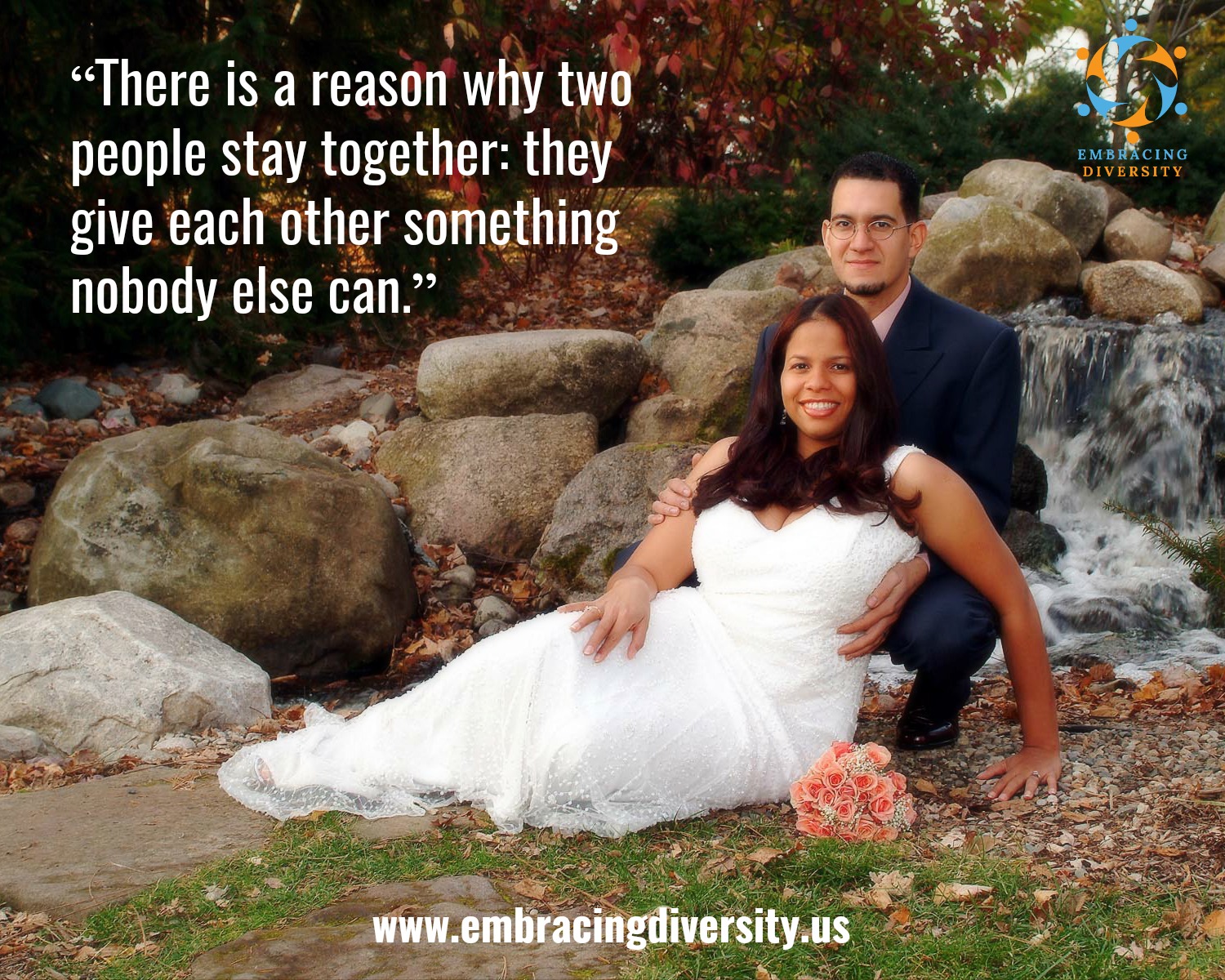 I’ve told this story many times and had never really written about it until now; finding love under my circumstances seemed unlikely and where I found it even more so. “Nunca más vuelvo a mirar a un dominicano”, swore my stereotypical heart after losing at love the first time around. As you have probably heard, Dominican men are notorious when it comes to love and commitment and although I know better than believing in stereotypes, I was hurt and bitter so I promised never to look at a Dominican guy. Yup, you know how this ends… lol.

My Dominican guy was truly a gentleman from Santiago, one of those I heard all of my life didn’t exist anymore. I didn’t know this at first sight and had no plans or ideas about a relationship with this skinny kid from New York that might even be trouble. His beautiful smile captivated me and although he is shy, he jumped at the opportunity of telling me how he felt and attraction and desire did their thing. Like I said, I wasn’t thinking about finding love, I was more a version of the guy on the Chucuchá song who didn’t want to hear about that.

Despite that, we were going together everywhere and having kissing marathons in the car despite the cold and the fact that he was supposedly leaving in a couple of weeks. Yes, when I met my hubby he was visiting Michigan and had a job and his things waiting for him in New York City. He eventually left and phone calls and messenger [yes, the messenger] were our lifelines. He invited me to visit him in New York for my birthday in May, he later came to visit in June, and it became imminent really quickly that we made a decision of who will move where.

A few long drives between Michigan and New York and endless conversations after, my love decided to move to Grand Rapids with me. This is the moment I knew it was worth finding love and not only that, my love will love me back. People doubted us, our families each had suspicions about the intentions each of us had, but it didn’t matter. Something just felt right, there was no drama, coded messages or strange phone calls. I had found my unicorn and we were willing to believe in each other.

Getting Married After Finding Love

If you would have told me I was going to be married at 28 I would have laughed in your face. I was one of those 20-year-olds who felt it was okay to just move in with a guy or not even that. I never dreamed of the white dress, beautiful sunny sky and crying mom at my wedding. But my fate was to be married after finding love, in the white dress with both of my moms present, in a beautiful, unusually warm September day in Grand Rapids Michigan.

Having a wedding wasn’t my childhood dream, never did I envision myself walking down the aisle, but the practical laws of immigration mandated that I marry in order to gain legal status. This fact made for a lot of doubt on my soon-to-be husband side of the family. A cousin of his even bluntly told my now mother-in-law that I was marrying him for the papers because she didn’t see it.

Finding love wasn’t as easy as if I had done it in the Dominican Republic with no strings attached, but life is much more intricate and exciting. Despite the doubts of others, the gossip, and the judgment, this was a match made in heaven. My apologies for getting corny on you.

Twelve years of marriage later, a total of thirteen years together and 3 kids that are the answers to my motherhood dreams, I’m living the life I never knew I wanted. Although my anniversary was one month ago, I’m still celebrating finding love in this crazy world.

I’d love to hear your own story about finding love. Please share!