As a mom raising my children to learn both Spanish and English, I’ve heard my share of advice throughout the years on the negative impact my children would experience because of learning two languages at the same time. Parents often approach me with doubts when these bilingual parenting myths are presented to them because for people who are new to the concept of bilingualism, there are valid concerns on whether or not this is the best thing for their children. 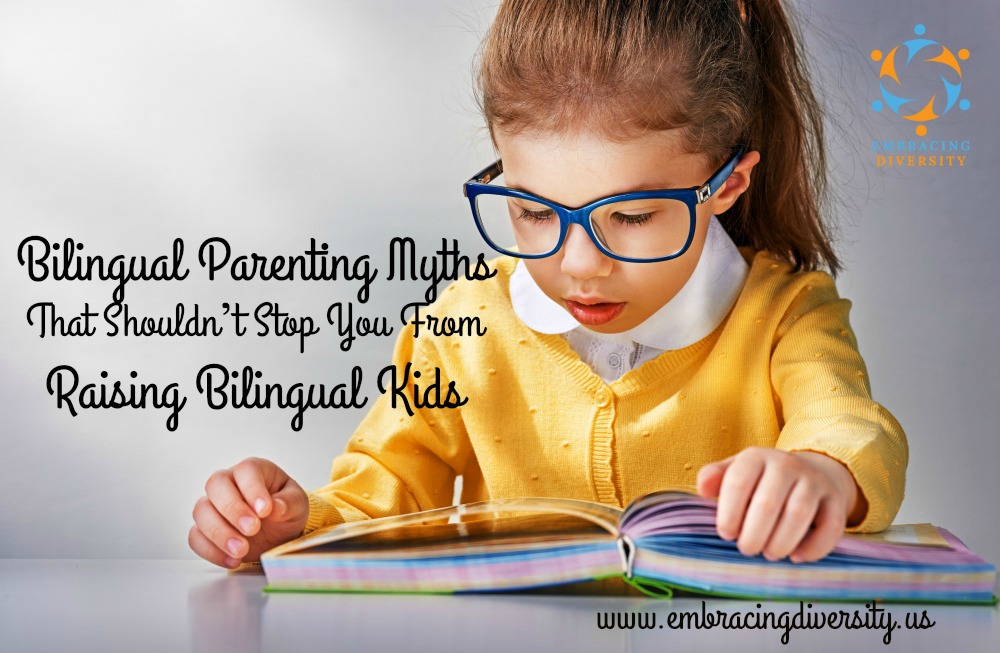 Fortunately for my kids, I was confident and followed my instinct instead of giving into the many bilingual parenting myths that are around planting insecurity in new parents’ minds about what direction to go when it comes to teaching their kids two languages. The United States has always being infamous for having a monolingual mentality, considering the fluency in other languages a trait for foreigners or people who are not ‘real Americans’.

Now that new generations are changing their minds about the benefits of bilingualism, opposition to it comes in other forms and parents often find themselves confronted with bilingual parenting myths that can be demotivating and at times, even worrisome. If you are in this situation, the best you can do is to get informed and be empowered to learn about the research and success stories that can give you peace of mind on your journey.

Throughout the years I’ve done exactly that, read, research and learn from other parents who have done it successfully. Now it’s my turn to pass the torch and share with all of you what I know and get many of these bilingual parenting myths debunked once and for all.

Bilingual Parenting Myth #1: Minority Language Students Are Less Successful. One of the fears parents experience is that their children will not adapt and succeed in school because of learning and using the minority language at home. Often times the recommendation is to make the child focus on the mainstream language so they can assimilate and adapt. The reality is that the learning of a second language forces the brain to work harder and it makes it more flexible, so bilingual students develop the ability to think outside the box. It has also been proven that bilinguals go on to do better in math and in problem-solving situations because of their flexible brains.

Bilingual Parenting Myth #2: Kids Only Need To Listen To Absorb The Minority Language. This is one of the bilingual parenting myths I would want to be true! If it was that easy, my kids would have been speaking 3 languages by now. Raising a bilingual child takes effort, consistency, patience and lots of love. Moreover, you need to expose your kids to situations in which they have to use their language skills. Even when they learn vocabulary, if there is no practice the knowledge will quickly fade away and the learning will stop. It takes effort from the parents to remind the kids to repeat things in the minority language and to ask them to say things in that language when they go automatically into the mainstream language.

Bilingual Parenting Myth #3: Get Them To Watch Cartoons & They’ll Learn. Again, wrong! While letting them watch TV in the minority language can be a good support to the process, it doesn’t solely make a child bilingual. The learning happens when the process is comprehensive and consistent. Playing games, doing activities with other kids, and singing are among the things you can do to support the learning.

Bilingual Parenting Myth #4: It’s Too Late Now To Make Your Kid Bilingual. For people who didn’t start bilingual parenting while their kids were very little but want to start teaching them, there is often the argument that they “missed the bus” and now their kid will not be bilingual. While it is best to start the language learning as soon as possible, you can learn a second language and master it at any age, especially when you are a child!

Bilingual Parenting Myth #5: Two Languages Will Only Confuse Your Child. This is a very common myth that I believe comes from the insecurities with foreign languages that some monolingual people experience. Those insecurities are often passed onto parents raising their kids to be bilingual. There is no evidence that points to confusion while learning two languages. What really happens when you see children mix the languages as they speak it’s called code switching, not confusion. Bilingual kids identify the two different languages from an very early age. 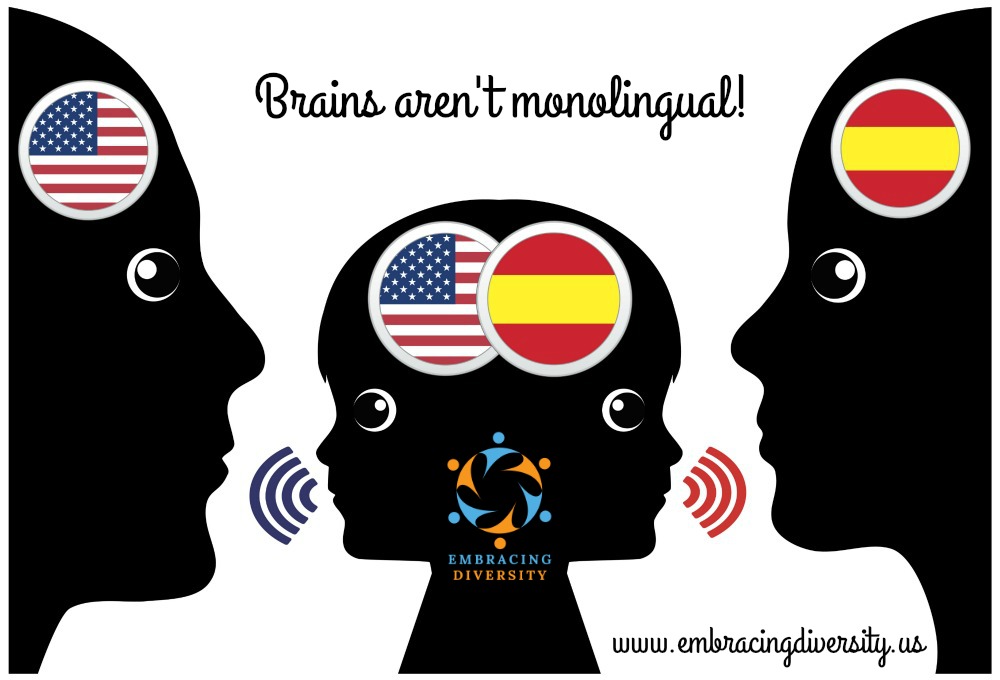 Bilingual Parenting Myth #6: Kids Who Speak A Minority Language Will be Shamed. While there is still resistance in the United States to hearing a foreign language being spoken, it is also true that many more Americans are embracing the idea of learning a second language. As a bilingual person who is parenting this way, I make a point to speak Spanish with my kids in public, in front of anyone (monolingual or not) to show them there is no shame in that. The only way others can put kids down, for any reason, it’s if we don’t prepared them by nurturing their confidence on who they are.

Bilingual Parenting Myth #8: It’s Better That Kids Learn One Language Well And Then Try To Learn Another. Just another way to tell parents that two languages are too much, confusing and/or harmful to the development of children. It is not only efficient to grow up bilingual since you are learning an important skill at the best time in life, but it is also beneficial specifically for brain development and growth. Learning a second language later is possible, but certainly harder than doing it early in life.

Bilingual Parenting Myth #9: Bilingualism Causes Speech Delay. A valid concern of many parents who face that their kids are taking a bit longer than their peers to develop language is that adding a second language to the mix might make it even more difficult for their children. A research published by Frank Genesee in 1976 that study children with learning disabilities showed evidence to the contrary; the children had higher levels of the mainstream language and spoke the minority language at a comparable level of the kids with no disability.

Bilingual Parenting Myth #10: Kids Raise Bilingual Are Torn Between Two Cultures. As someone who is very passionate about identity and who uses language to nurture my children sense of identity, I know for a fact that they don’t experience identity confusion. A person’s identity is shaped by more than language, as speaking a tongue just gives you the understanding for the culture. For kids who aren’t bicultural, learning a second language provides a window into another culture, but that will not make them be confused on who they are and their own identity. In the case of bicultural children, they will only be torn if they feel pulled by one of their backgrounds or the other to choose a side, but just learning the language by itself will not cause an identity crisis.

Bilingual Parenting Myth #11: Practices Makes Perfect, Therefore Bilingualism Is Time Consuming. This idea discourages many parents from even pursuing raising bilingually. Busy parents cannot dedicate unlimited hours to just helping their kids acquire a second language, there are many other things we must do for our children in our daily lives. The good news is that you don’t need to invest a lot of time to support your kids in learning a language, you can integrated to your routine activities, play dates and the time when you help them with homework. If you speak the minority language, simply use it throughout your day and it should be fine.

Bilingual Parenting Myth #12: Brains Are Monolingual. Another myth with no scientific base is that our brains are naturally monolingual. The fact that there are people who can speak two, three, four and more languages is proof that brains don’t favor monolingualism. This theory comes from a believe that the brain gets confused when another language comes into play. The reality is that our brains are capable of deciphering multiple languages without any problem.

There are other bilingual parenting myths out there that might confuse or discourage you from entering this journey. I encourage you to remain confident and remember the many cognitive benefits of bilingualism as well as the cultural and social advantages it provides. Your children will thank you in the future.

What other bilingual parenting myths do you know of?

Previous Post: « Expat or Immigrant: Is The Difference Class, Race Or Politics?
Next Post: Cultivating Cultural Connection One Dominican Recipe At A Time »